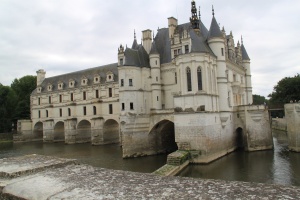 I wanted to fill in some of the gaps on our trip to France that I was not able to do earlier.  As I mentioned in a previous post we used Trip Advisor for most of the research regarding places to stay and tour guides.  Using an outside source for information can be somewhat risky and one never knows if the information is actually true for the most part or not.  After our experience with our tour guides and the B&B’s we were very pleased to discover the information posted was spot on.  Our tour guides in the castle regions near Tours were Susan and Simon Walters of Loire Valley Time Travel.  From the moment I inquired about tour availability during our dates of stay to assistance with accommodations both Susan and Simon were extremely helpful and always very prompt to answer any questions.  They are the ones that initially suggested La Maison Jules in Tours for a B&B along with a couple other accommodations.  Both Susan and Simon get a shout out for that suggestion!

Once we had booked with Susan and Simon and explained that we were traveling by train they agreed to pick us up at our door at La Maison Jules.  How’s that for service? :).  From the moment we got in the car, which was a 1956 Citroen (Simon actually switched cars during one of our stops to a 1953 Citroen)  they seemed to know exactly how to explain the history of each area we explored and tie it into the culture and architecture.  The only complaint, and I do mean only complaint, that I had was that it was sometimes difficult to hear Simon over the road noise.  Having said that I also have to admit that my hearing isn’t nearly as good as it used to be!

One thing we really enjoyed about the day was that Simon did not take any major roads to any of our destinations.  The trip had a very rural feel and the scenery was great.  Our first stop was Loches which I would estimate to be about 30 – 40minutes outside of Tours.  The town was small and had a real “community” feel.  Susan walked us through the town including the market (well worth the stop but only open on Wednesday and Saturday) all of the time giving us a history of the city and answering many of our questions which she did very well.  Loches is a very old city with origins back to around 500.  Since I’m not a historian I will not attempt to get too specific but the castle was built during the medieval period and the original walls are still standing.  Also, Richard the Lionheart occupied this castle in the 12th century with his father Henry II of England and it was in this castle where Joan of Arc convinced Charles VII to go to Reims to get crowned.  This boosted the morale of the French and it was during his reign that the French started to take over more control of the area.  In other words, this castle is very cool and is definitely worth seeing.  The city itself was constructed during both the medieval and renaissance periods and you can definitely see it in the architecture.  This is where Susan’s knowledge of the history really started to help us connect the dots from the English rule to French rule and the transition from the medieval period to e renaissance period.  We had one of those “aha” moments and for a couple of remedial historians I would have to give Susan 5 stars just for being so patient with us.  This actually made the remainder of our time in France more enjoyable because we could actually start to see the differences in each town that we visited.

After our walk through Loches we stopped and had lunch which was great.  The restaurant was located in Loches not too far from the castle and served some very traditional French food.  We had plat de jour which included a salad, entree and dessert and a glass of wine.  It was perfect and one of Susan and Simon’s favorites and I can see why.  We were then off to Chenonceau.

The first thing we had to do was learn how to “not butcher” the pronunciation.  I had Susan sound it out slowly and it’s pronounced “shen-non-so” or at least that’s how those of us from the northwest corner of the US would pronounce it.  Some French words are ridiculously hard to pronounce but hey, try to have them pronounce Puyallup!!  Ah, but again I digress.

Chenonceau is incredibly beautiful.  First of all, Simon delivered us to the front of the parking lot and I have to admit being driven to literally the front gate of a chateau like Chenonceau in a classic car was special.  Very nice touch.  Now the chateau.  The original castle dates back to the 11th century but most of it was destroyed and later rebuilt during the early years of the renaissance period.  This chateau is huge and the grounds were our favorite part.  I won’t bore you with the history but this chateau survived the WWI and II wars and was a key river crossing that no one wanted to destroy.  My view is that once both sides saw the chateau, no one wanted to destroy it and not have access to it once they claimed victory.   Made sense to me! :).  We could easily have spent the entire day just walking through the grounds but we have wine to taste so off we go.

The final stop with Susan and Simon was Domaine du Clos Roussely which is located in Ange’ approximately 20 minutes from Chenonceau. We had a chance to walk through part of the vineyard and taste some very good wines. This was a very good way to end the day. The drive back to Tour was about 45 minutes and followed a couple of rivers including the Loire and after some wine tasting was about as relaxing as it could be.  Susan and Simon delivered us right back to our door which after a day of castle exploring couldn’t have worked out better.  An outstanding day!